“The land being utilized for the entire project was formerly known as Indian Hills Country Club, a 1924 Perry Maxwell design. Our concept was to enhance the original Maxwell holes we could keep in part, and to design new complimentary holes that utilized the same design characteristics that Maxwell was famous for.  Tripp kept four of the best original Maxwell holes, tweaked the layout of four others and was careful to route the new holes as he thought Maxwell would." - Jeff Jarrett, Director of Operations This course is an original Perry Maxwell design and was considered one of his best.  Throughout the years, the course evolved.  When the Cherokee Nation bought the course, they had plans to redesign it to allow room for a new casino and hotel.  TDA was hired to modify the existing layout and create new holes that would be a "tribute" to the Perry Maxwell style of design while accommodating the new development.  The design includes Maxwell's trademark bunkering style and rolling greens, as well as his tendency to "find" holes and move very little earth.  Less than 50,000 cubic yards were moved to build this new course and numerous rock outcroppings and natural waterfalls were incorporated into the design.  We were able to maintain 4 original Maxwell holes and several more of his unique green and tee locations.

Jeff Jarrett and Harold Langdon of Cherokee Nation Enterprises were the two individuals responsible for convincing their group that the rebirth of the golf course would be positive and they knew the historical connection with Maxwell could somehow be used.  After a lengthy search for a golf architect who could best create an outstanding new golf course with a thread to Perry Maxwell, they selected Tripp Davis and Associates.  Cherokee Hills Golf Club is part of the Hard Rock Tulsa Casino complex. 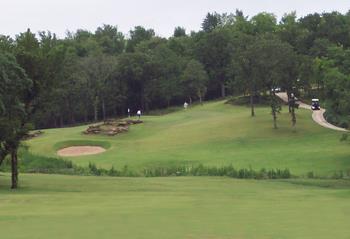 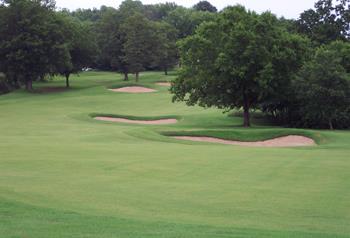